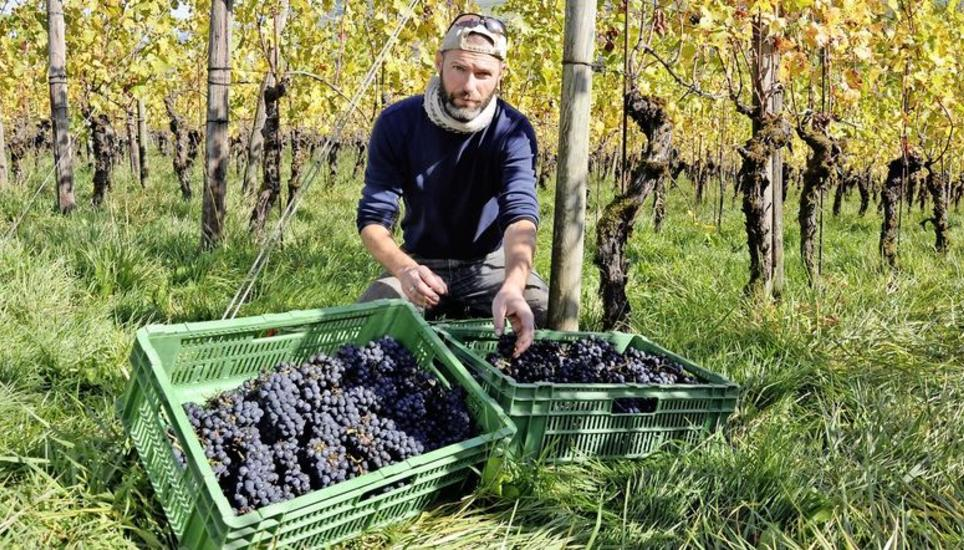 Swiss wines are hard to find. Swiss wines from the German-speaking part of the country are even harder. Hardest of all would be natural Swiss wines from the German-speaking part. For a long time that didn’t even exist but someone had to be first. That trailblazer is banker-turned-winemaker Markus Ruch, widely credited as one of the first to produce Swiss natural wines and is a respected leader in the burgeoning movement today.

Since 2007 Markus has been cultivating his own vineyards in Klettgau, part of Schaffhausen, a northern outcropping of Switzerland surrounded by Germany. With the Black Forest on one side and a geological extension of the French Jura on the other, its sedimentary bedrock of limestone gravel, shell limestone, and fine clay resembles the chalky soils of Burgundy. It’s the reason why Markus came here – to grow Cru-level Pinot Noirs.

Meticulous in his approach to organic farming with biodynamic principles and minimal intervention once the grapes arrive at the winery, Markus is both a believer in tradition and pushing boundaries of how people can make wine in Switzerland.

To infuse some character into his Müller-Thurgau, also known as Riesling-Silvaner in the German-speaking part of Switzerland, Ruch has it undergo spontaneous fermentation and skin-contact maceration in amphora for up to a year. There is no added sulfur to this wine. Among the first orange wines ever made in Switzerland.

The golden yellow color with greenish and amber reflections makes it an unconventional “orange wine.” Its aromas of of pear cider, herbs and rose petals, along with a dry palate and beautiful acidic structure make this is an easy-drinking skin-contact wine that also becomes more complex as it opens up.

This Pinot Noir is made of grapes sourced from different vineyards in the Klettgau and represents a cross-section of the terroir that Markus Ruch strongly believes in. Despite being spontaneously fermented and having zero sulfur added, this is a more classic Pinot Noir. It matures for one year in Burgundy oak barriques and is then bottled unfiltered and unfined.

Medium intense ruby red, the nose brings aromas of ripe cherry and raspberry, but also ginger and herbs. The harmonious mix of acidity and tannins makes this wine a truly perfect pairing with a wide variety of meals.